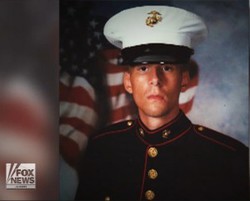 Reporter Jamie Colby: Some really important concerns this Memorial Day weekend about the treatment our soldiers receive when they return from battle. And there’s a Fox News investigation into the increased use of powerful psychiatric drugs on our veterans and the impact these drugs are having. Our Douglas Kennedy looked into this as part of our series on drugging the American soldier.

Douglas Kennedy: Unfortunately says his father Stanley, he could not survive the drug cocktail prescribed to him by his caregivers at the Department of Veteran’s Affairs.

Douglas Kennedy: Andrew was prescribed 19 different medications from the VA, and was on 5 drugs for insomnia when he accidentally died in his sleep in 2011. A cocktail that included the antidepressant Paxil, the anti-anxiety Klonopin and the antipsychotic Seroquel.

Peter Breggin: It’s inexcusable to be giving our military and our vets multiple psychiatric drugs and cocktails. They do no good, they do huge harm.

Douglas Kennedy: Peter Breggin is a psychiatrist, who says the military and VA’s use of psych drug cocktails is verging on criminal.

Peter Breggin: We now know that exposure to multiple drugs over a period of months or years leads to chronicity, it leads to disability…

Douglas Kennedy: And he says it leads to suicide and accidental death. Still between 2005 and 2011, the military and VA went on a spending spree with psychoactive medication. Increasing prescriptions by a whopping 682%. An increase, which this military spokesman defends.

Military Spokesman, Captain Michael Colston, MD, U.S. Navy Medical Corps: What might be appropriate in addition to giving an antidepressant drug, to give a medicine that helps with the anxiety for a little while and then when the anxiety goes away but the depression hasn’t still quite remitted, you may want to think about using another medication.

Douglas Kennedy: The military says the use of drug cocktails is safe if used as prescribed. What would you say?

Stan White: I do not agree. There’s no research available that we know of that says that multiple drugs are safe.

Douglas Kennedy: Unfortunately he says his son was a guinea pig, for what he calls psych drug experiments. In Charleston, West Virginia, Douglas Kennedy, Fox News.

Douglas Kennedy was the first national reporter to link antidepressant medications to adolescent suicide and violence, prompting government hearings that eventually resulted in the black box warnings from the Food and Drug Administration. Most recently he exposed an Internet fraud selling phony cancer drugs to the terminally ill, in which the owner of the Web site was later indicted. Previously he worked at the New York Post as a crime reporter and solved a double homicide in Queens by finding a dead body before the cops. Read more about Douglas Kennedy here.